Following is the SPAM mail which most of us has received and many ended up in replying to it.

Good a thing to write you. I have a proposal for you; this however is not
mandatory nor will I in any manner compels you to honour against your
will.

I am Aisha Al- Salam, 23years old and the only daughter of my late
parents Mr.and Mrs.Hassan Al-salam my father was a highly reputable
business magnet - (a cocoa merchant) who operated in the capital of Cote
D Ivorie during his days.

It is sad to say that he passed away mysteriously in France during one of
his business trips abroad year 12th.Febuary 2007. Though his sudden death
was linked or rather suspected to have been masterminded by an uncle of
his who travelled with him at that time. But God knows the truth! My
mother left me when I was just 4 years old, and since then my father took
me so special.

Before his death on February 12th 2007 he called his secretary who
accompanied him to the hospital and told him that he has the sum of 7.5
million, United States Dollars.(USD$7,500.000 ) left in one of the
Leading Bank in Cote D Ivorie and he deposited the money in my name in
the bank as the next kins.

I am just 23 years old and a university undergraduate and really don't
know what to do. Now I want a foreign partner overseas where I can
transfer this fund. This is because I have suffered a lot of set backs as
a result of incessant political crisis here in Cote D Ivorie . The death
of my father actually brought sorrow to my life.

Sir, I am in a sincere desire of your humble assistance in this
regards.Your suggestions and ideas will be highly regarded. Now permit me
to ask these few questions:-

1. Can you honestly help me as your daughter?
2. Can I completely trust you?
I have decided to offer you 30% of the total amount for your willingness
to help me, Please kindly response to my mail immediately with your full
personal information, telephone number so that I can call and speak with
you on the telephone.

Please, consider this and get back to me as soon as possible.

Thank you so much.
Insallah .

Below is the SPAM mail which I received in my INBOX. To make it realistic spammers had gone one step ahead and provided with contact numbers and few images to make it realistic and entice users to give their personal information. 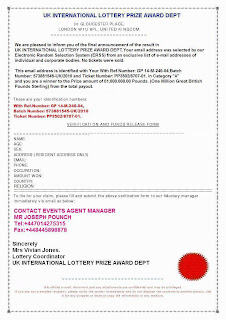 FROM THE DESK OF THE DIRECTOR:
UK INTERNATIONAL LOTTERY PRIZE AWARD DEPT

WINNING NOTIFICATION FOR CATEGORY "A" WINNER ONLY

We are glad to inform you that you have won a prize money of One Million
Great Britain Pound Sterlings (£1,000,000.00) in our last lottery promotional
draw.

We are pleased to inform you of the final announcement of the result in
UK INTERNATIONAL LOTTERY PRIZE AWARD DEPT. Your email address was selected by our Electronic Random Selection System (ERSS) from an exclusive list of e-mail addresses of individual and corporate bodies. No tickets were sold.

Most of the netizens fall pray for this and end up providing their information. Above details can be used to crack passwords with intelligent guesses.

Before providing information in reply to such mails think once, "who the hell in this world is going to give free money !!! "